I have to say I've been missing you too.  The World Cup has been on everywhere and it's hard to dodge it or not feel trunky when I see it.  But it's not too bad.  I'm managing it ok.  We went to teach Z the other day and the very end of the Brazil game was on and I saw the score I think it was 1-0 at that time or 2-0 and Brazil had basically already won the game and then I saw Neymar flick the ball over the defenders head.  It made me so mad.  Man I hate that guy what an idiot.  How can he do something stupid like that.  What a joke.  I hope Brazil lose next game and don't qualify.
It's been funny to be with my companion though for the world cup.  He always says funny stuff about soccer and then says "It's not because I'm Brazilian it's just because that's really what I think."  And then if we're talking to anyone else about it they always just agree with him because they don't know anything and he's Brazilian.  For example: Who's the best player of all time.  Me: It's Messi.  My companion: It's Ronaldinho.  Everyone else:  Yeah definitely Ronaldinho.  Hahaha what the heck.  Nobody ever says Ronaldinho but they just parrot whatever he says haha.  Also he tries to convince me that the teams in Brazil are better than any of the teams in Europe because they win the club world cup.  Hahaha. For the most part what he says is good and correct and he's a really good player himself.

We've been playing soccer every morning at the chapel with different companionships which has been really sweet.  It's good exercise and it's helping me get a little bit of my touch back which will be good because I'm feeling a bit rusty after not playing for a while.

We played with the ward on Saturday as well.  It's frustrating to play with South Africans though because they don't really care about scoring or winning.  Honestly it's not their motive.  They always make the field as big as possible and the goal as small as possible to eliminate as much scoring as possible.  Then the point of the game becomes who has the quickest and fanciest dribble.  And it's not even like the dribble past you either.  They never try to dribble past anyone ever.  They just pull the ball back and forth and wait for you to try and steal it and then they just pull it back and pull it back until they get to their own end line and then they pass it away.  And then they turn to you and laugh as if they just smoked you.  It doesn't make any sense.  On Saturday we played the young men and we beat them 4-0.  It was me and my companion and 5 12 year olds against all the 17 year olds.  We were up 4-0 and they still took the ball in their own half and just stood on it waiting for us to come and steal it.  It confused me so bad because we were winning 4-0.  And yet they don't even care.  They have no desire to win or score.  They just want you to go and steal it so they can try and do some quick dribbles and keep you from stealing the ball.  And then after the game, we just beat them 4-0 scoring 4 times on a goal that was about 2 feet wide on a 7 v 7 pitch, and they don't even think they lost because they had done all the cool dribbling they wanted to do.  Hahaha it's always fun to play with them but it's no wonder why South Africa isn't very good.  Even the professional teams play exactly the same way.  And all the South Africans I know are terrible at shooting because they don't like shooting or scoring.  But to be fair just about every South African I have ever met that grew up in the township is a pretty good dribbler and has good ball control.
But it's been good to be with Elder Dos Santos.

This week was great because we had a baptism.  We also had Zone Conference and some other nice things.

The baptism was great.  It was just brother Z who got baptized.  He's great.  I've loved teaching him and also I love the food his wife makes for us every time we come.  He's come a long way since we've been teaching him and I'm really excited to see him going forward.  Him and his wife have committed to prepare for temple sealing next year.  That will be super awesome.  After the baptism we went to his house to give him his new member kit and he was so happy.  He just kept saying thank you so much for everything I feel so amazing I feel like a new person.  He's an awesome guy.  The baptismal service was also really nice.  The Elders Quorum President gave a talk which was really nice.  and Sister Mndende gave a talk which was really touching.

Zone Conference was cool.  Before our interviews on Tuesday President came to our boarding to do daily planning with me and my companion.  That was pretty cool and he had great ideas to bless everyone that we were teaching and things we could do to strengthen them.

Zone Conference was nice though. President trained about a lot of stuff that we already talked about during MLC last week so that was kind of too bad, but he gave a really great inspiring training about how to pass new converts over to the ward, that is going to help me a lot.  It was Elder Burns last Zone Conference so he's going home.  I'm going to miss him he's one of my best friends on mission.  But he's going to Utah State so I'm only going to miss him for like a month haha

Me and my companion have been finding a ton of great new people and having loads of success this past week.  It's an exciting time to work here in this ward because it's going to split really soon.  Also President Lebethoa is going to be taking lots of cars, but not ours, and he's instructed us to walk as much as possible with the Book of Mormon in our hands.  It's been great and yielded a lot of fruit.
Here are the pictures from the baptism 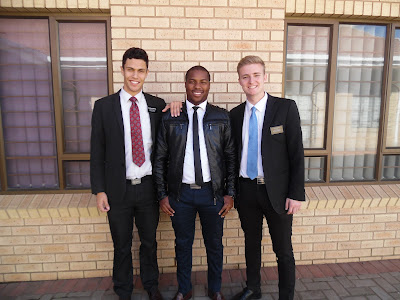 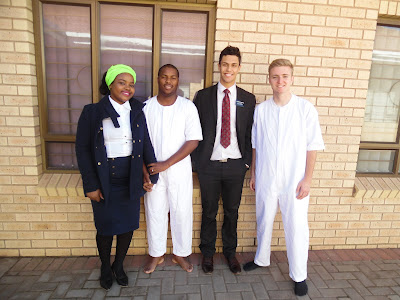 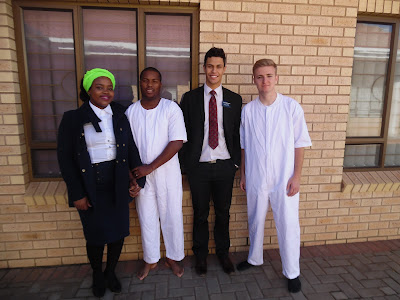