Me and my companion played tons of street soccer this week.  Everyone has a 3 week break from school right now so the kids are playing like crazy in the street.  We even look for older kids sometimes and we just challenge them and we have our own ball so it works out nicely.  One game was really sweet.  We found a bunch of kids who wanted to play and so we set up the field and started playing and tons of people came to watch and all the neighbors came out of their houses to watch and we had so many fans.  We played 2 goals for a game and then a new team would come on.  We played about 6 games and we won them all 2-0 except one of them was 2-1.  The great thing was that the other teams were always pretty good so they always thought they were going to win and then they'd be so disappointed when we won.  And every time we scored all the kids and the fans would go nuts.  It got to the last game and we went up 1-0 early and then they started going really really hard because they wanted to win.  then we played like that for about 5 minutes and then I got the ball near the goal and this kid was going really hard and he came for the ball and he went all in and I totally destroyed him and scored and all the fans went nuts hahahahaha.  It was a lot of fun.  But me and my companion are destroying everyone right now and of course we're undefeated and I think undefeatable.  After the games we gathered everyone together and had a nice prayer.  In all our games we agreed with the other teams that if we won they would come to church and if they won we would bring them cookies.  It was cool because everytime they were so confident and then we started scoring and all their buddies watching the games would say "niya caweni!" you're going to church hahaha.  None of them came to church though, but I hope their conscience haunts them knowing that they totally flaked and they should have come and maybe another week they will come.

It's been a slow week for us here.  On Saturday we had a birthday party for Mama Ngondo who turned 100.  I love birthday parties here because they're more like sacrament meetings.  We open with a hymn and a prayer and then have a spiritual thought.  Then someone from the stake president is invited to come and give the sermon.  Then some speeches and we close with a hymn and a prayer.  That's what happened on Saturday but it's not just that one.  That pattern of birthday parties has happened 3 times since I got to Queenstown haha I think it's super funny.  But the party was nice but it took almost the whole day and we couldn't leave because we were like the guests of honor or something like that so we ended up staying there until 5:30.  It was supposed to start at 12 but when we got there at 12 they told us to come back at half 1 and when we got back at half 1 it was about to start so we stayed, and it didn't even start for a whole hour after that.  So it went from half 2 to half 5.  African time. Haha but we were able to meet a lot of people there so it was alright.

We played a lot of street soccer with kids throughout this week which was really cool and we obviously destroyed them every game.  They all promised to come to church if we won, and we won every game, but none of them came.  Shame.

Sacrament meeting was interesting.  We had the confirmation of Brother M which was good and we had 2 other investigators come for the first time which we were excited about.  Something that really makes me laugh and I can't remember if I told you this already, but at least one of the speakers every Sunday just stands up and reads a talk from a general authority and then sits down.  Sometimes all 3.  Even the stake speakers sometimes come and just read a talk from conference.  It's really weird and it makes me laugh.  This past week though we had fast and testimony meeting so it was great.

This week we are going to Cape Town for another meeting.  We're leaving tomorrow and getting back on Thursday so that will kind of destroy our week but it's fine

It's currently snowing outside so that's pretty awesome 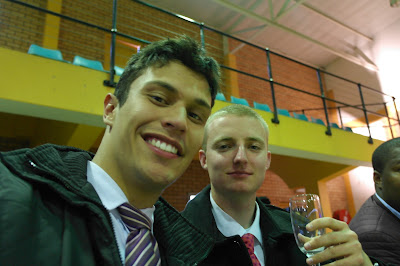 Me and my comp at the party