This week has been a pretty hectic week.  I was only in my actual area for about 15 hours.  On Wednesday I was on an exchange with Elder Khoza my last born son.  It was pretty awesome to be with him for the day.  It's crazy he was telling me that he has been on mission for 8 months.  That's crazy.  But he was doing really well.  He's a great missionary and it's nice to see what kind of things he's learned and how he's improved since I left him.  We see each other a lot though so it wasn't that crazy to see him.

On Thursday we drove to the air port in East London because I was flying to Cape Town for an exchange.  I called the Davies(Senior couple) and asked if we could come over which they said yeah so it was nice to see them.  Of course they prepared a really nice lunch for us with all sorts of desert.  Then we went to the airport and I flew to Cape Town.  Elder Huang arrived so it was nice to see him and then I left.  It was really weird to be alone on the plane.  There was a lady that sat next to me and I wanted to talk to her about the gospel, but she pulled out a book.  After about 5 minutes she put it down so she could look at something else.  Then I asked her if I could look at her book.  She said yeah so I looked at it for a minute.  It was like some inspirational book about creativity or something.  When I gave her her book back she asked me what I was reading.  Haha that was nice.  I gave her the Book of Mormon and we talked for the entire rest of the flight about it.  It was pretty cool I told her all about Joseph Smith and the restoration.  I gave her the number for the elders in Cape Town and she said she was really interested.  It was a nice experience.

I had a really nice exchange in Cape Town.  I was with Elder Sibiya.  I don't know if you know about him but he's a friend of mine.  We've served together for a lot of our missions.  I was able to meet up with a lot of cool people that side as well.  I saw Daniel Clark for only the second time in my whole mission.  That was really cool.  We talked a lot and shared some stories about what's happening back home. It was sweet.  I saw Elder Dove at district meeting.  That was really nice.  And some other of my mission friends and transfer buddies and stuff.  But yeah it was a really nice exchange and I learned a lot.  On Saturday morning we went to the air port and I flew back to East London.
From East London we had to drive to Mthatha instead of Queenstown because we had to do some baptismal interviews for some of the Elders that side.  So we stayed the night with them and then on Sunday we woke up an hour early and drove back to Queenstown for church.  I was pretty exhausted on Sunday from all of that travelling.

Plus I hardly ate in Cape Town.  The members didn't feed us and Elder Sibiya didn't have any food in his boarding except for like 50 or 60 apples so all I had was about 10 apples the whole time.  It was such a relief to get home because the members in Queenstown feed us like no other area I've ever seen.  On Sunday we had 3 DAs and the last one they just gave us the dessert and put the food in a container for us.  I was just thinking "It's good to be back"  hahaha

But it was a pretty cool week.  On May 1 Elder Palmer, the area president, is going to visit our mission so I'm really looking forward to that.

There's not much interesting this week that I didn't already tell mom.  But one of the missionaries has the book: "The Infinite Atonement"  By Tad R Callister, so I've been reading that all week and I'm really excited about it.

From one of the Senior missionaries in Adam's mission:

Sister Heald,  We celebrated Elder Heald's birthday at district meeting today. I made a short video for you


but cannot send it through yahoo.....do you have a facebook account....I can send it to you privately.

And she sent pictures as well as the video that she posted on my facebook page! This is Adam with his companion. 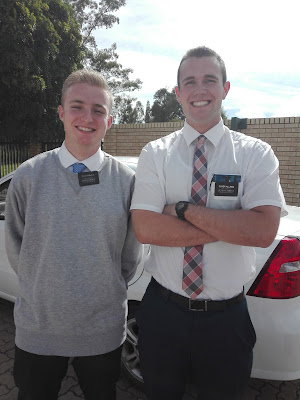 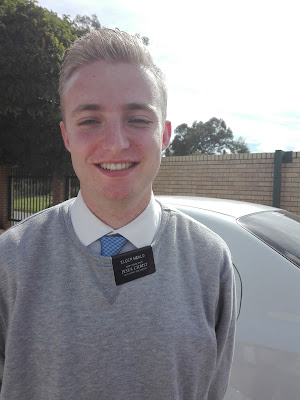 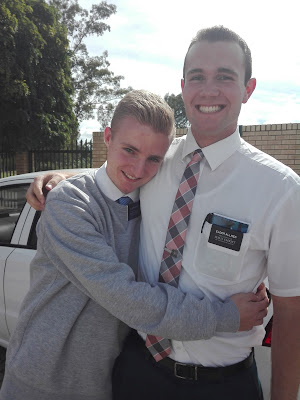