I was reading in Alma 36 the other day and I noticed that the last verse and the first verse are the same, so I became a bit interested, and I looked through the whole chapter and discovered that the whole chapter is a Chiasmus!  I am sure that that's probably pretty common knowledge but I felt kind of cool for discovering that on my own.  Almost like you discovering that in D&C 1 but not quite as cool haha

There's been this kind of mission legend about a witchcraft talk.  I've heard all kinds of stories about it, the guy got excommunicated, the guy didn't get excommunicated he was a seventy, no he was just a guy, it's fake, it's real.  Anyway my companion actually has the talk so we listened to it.  It's pretty interesting.  There's a few things that he says there that I really like and that I think are really interesting.  Anyway I googled it and found some stuff that it was a mission legend in lots of different missions and stuff.  I wondered if you'd heard about it.  It's interesting but I prefer to learn the doctrines of the Lord and how I can profit from them, then to learn what wicked things are happening in the world.

Yeah I think a bunch of us are going home on July 17.  From the group email it seems like probably 5 or 6 of us go home that same day.

Nana emailed me about that retirement.  It seems like a lot of stuff is happening with them that you guys could easily be just making up.  The fact of them living with you seems really weird, and I will never see it with my own eyes.  And by the time I get back they will be living in England!  Weird.

We had a nice week.  First of all we got dropped like crazy.  I don't know what happened.  We probably got dropped like 6 or 7 times a day on average which just really slows things down.  It was pretty frustrating.  But it's weird because at the same time we met 5 or 6 new people this week that are way exciting and are definitely going to get baptized.  In the space of 1 week this area went from being a bit slow and frustrating, to just overflowing with exciting prospects.  Genuinely of the people we met last week I think we'll have 5 or 10 baptisms.  Super amazing.  We met 2 awesome father led families.  1 was a referral from the bishop.  I'm just so excited about them both.  I was hoping to leave King Williams Town but suddenly I'm hoping to stay!  I've also had a sweet idea for a big event that I want to plan and I've had this idea since I first went to Uitenhage so a long time.  Well I told the bishop about it and he liked it a lot, so I presented it to the ward counsel yesterday and everyone was pretty excited about it.  We're planning the event for March so it should be sweet.  Basically we're planning to invite all the people in all of King to come to the chapel and we're going to preach the restoration to them from the pulpit.  Exciting stuff

Some other funny things happened.  Me and Elder Steffensen played with some kids 8 on 8 in the street the other day.  There was a lot of kids so we went on different teams.  Those kids thought we were way good so they started calling me Messi, and Elder Steffensen Ronaldo.  It was really funny.  Every time I got the ball they'd be like "Pass it Messi!"  And if I scored a goal they'd all freak out and just yell "Messi! Messi! Messi!" hahaha.  when I left they were like "Bye Messi, you're always welcome here!"  Haha I went back the next day on exchange with Elder Shaw and they all crowded the car and started freaking out yelling in Xhosa and chanting "Messi Messi Messi!" hahahaha funny

Another thing that happened that was really nuts.  First of all we live in a townhouse, so our house is connected to our 2 next door neighbors.  Anyway while we were in the area on Wednesday our next door neighbors house burned down.  We didn't even notice until the next day when we were leaving for the area.  It was pretty nuts.  On one side of the wall the house is totally burnt and destroyed and on the other side of the wall is our bedroom.  None of our neighbors knew our phone number so they couldn't even call us hahaha.  The house was just about to burn down and nobody could get ahold of us.  We would have come home from the area and there was just no house there and we wouldn't have even known.  Crazy story.  Moral of the story.  Get to know your neighbors.  But I don't think anybody was hurt in the fire so that's good

On Saturday we went to a birthday party for a girl named Y turning 2.  It was super hilarious.  her parents, brother and sister m prepared gift bags for all the kids in the apartment complex where they're staying and they invited them over.  So they were passing out the bags to all the kids and all the kids started freaking out and fighting over who got which bag and stuff, doing what bratty 5 or 6 year old kids do hahaha.  But then Y took one of the gift bags and walked straight over to the most obnoxious kid and with a big smile on her face she took the bag and just clocked him straight in the face.  It was so funny we were laughing so hard.  This little girl!  As if she was saying "Hey! it's my birthday be grateful!"  Hahaha the kid was like holding his face but it was pretty funny.
Sunday it rained so a lot of our investigators let us down.  We still had 14 but we could have had so many more.  We were disappointed but a lot of really good things happened this week that we were excited about.

Sunday was also a big day for me.  18 Months on mission.  Time flies.  I've now graduated from being a sister missionary and I'm an Elder. 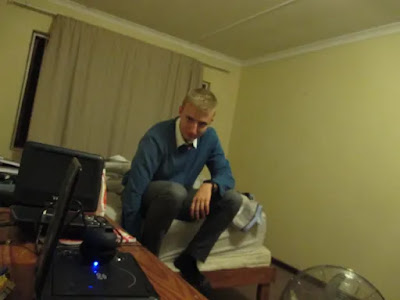