The thing that has changed the most about me... hmm Nothing major has changed about me.  I am still pretty much the same person that I was.  I guess some things that have changed though is that I really really love to study now.  I spend almost all my extra time reading the book of mormon or the bible or Jesus the Christ.  Also I have really gained a desire to improve myself physically and I've been working out every single night so that's new.  I would say Also I am a little bit more mature.  I have made myself a goal to always stay young.  Even now I feel like I'm still 16.  I would say it's part of who I am to be young at heart and my goal is to never get tired on mission and never allow myself to get lazy and also in life even when I'm old I want to stay young at heart.  But I think I have learned a little bit when it is ok to act younger than I am and when I need to act mature and present myself as a representative of Jesus Christ.  And I'm still working on it but I guess I would say I am acting more mature when it's time to be mature.  Being kind of crazy is really really useful in street contacting though.

What do i wish I would have done to prepare?  If I could do it all again I would read all of the bible and all of Jesus the Christ before mission.  I'm having to catch myself up now.  Also I wish I would have done better missionary work.  There's a couple people who I really wish I would have talked to about the gospel from home and even lately I have been emailing some of them.  I'll tell you a story.  So I don't know if you remember B? I kept on emailing her and talking to her about the gospel and she said she's never really read the book of mormon before and she decided to really start praying and reading the book of mormon and she said in a week she read all the way up to Enos so that was pretty sweet.  Anyway The thing I wish i would have done is better missionary work before I came out and better home teaching.  I really want to be a better home teacher when I get home.


And learned how to cook.  I should have done that.

To Mom:
yeah hahah the haircut was funny there was a bunch of people gathered around because they thought it was funny hahaha,.  My comp has been driving all the time lately but usually we switch off pretty even.

I think I made a terrible error in my last email to you.  I said we get 200 dollars a month.  We only get 100 dollars a month.  It's terrible.  But I have been thinking a lot.  First of all I have really made a decision to live the word of wisdom and to become way ripped and healthy and stuff.  I've been running every morning.  Even I've been running with my comp and then coming back and running with Elder Faingataa who is the new elder in the boarding.  Also I've been working out every night for a while now.  I really really want to be healthy but I just can't eat healthy with the amount of money that I have.  We eat well when the members feed us.  I don't know if I told you this but last week I ate chicken liver and chicken heart.  The heart was actually super good I really liked it.

Yesterday we had kind of a funny experience.  We pulled our car up to this guy and we were like hey we have a gift for you and he was like ok and we were like here is this pass along card if you text your name and address to the number on the back we'll bring you a free dvd about Jesus.  So we were about to hand it to him but then he was like no Jesus isn't my friend and we were like what?  And he said Jesus isn't my friend.  My friend is Qomata.  He teaches me to slaughter cows.  Hahahahahaha we thought he was joking but he was dead serious so we took the pass along card back and drove off hahahaha

My companion wants us to go to a game park some time this month.  It will be really cool.  What it is is a huge reserve for African animals that live in the wild and you go with a guide who takes you around in a land rover and he takes you to see all the african animals in their natural habitat so it should be way sweet.  It's going to cost about a thousand Rands though which is about 80 or 90 dollars.  I should have some sweet pictures soon though.

Here is a picture with a guy called Lux. He's super powerful I think I've told you about him.  But yeah he has a sick beard and this picture shows what my hair looks like now. 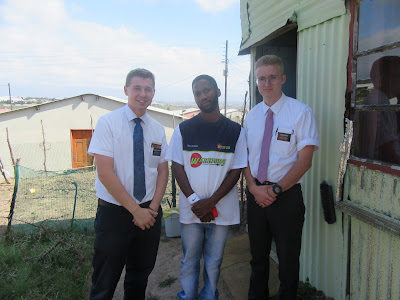 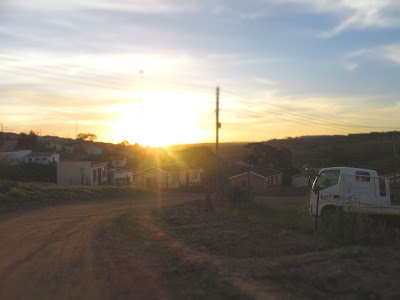