One thing I really want to do when I get home is play a lot of piano.  I play the piano at the chapel sometimes if we're there and have spare time for some reason but I don't really get to play at all and I really miss it.  I think I'll play a lot when I get home.
Don't worry about me I'm doing super.  People probably ask you like 10 times a day how's Adam doing on mission?  You can just tell them I'm doing super :)
So on Saturday we had an appointment drop and so I thought it would be funny to get my hair cut.  So we went to this shack where this black guy cuts hair and I asked him to cut my hair.  Haha it was super funny though because Mdantsane is a 100% black area and he had no idea how to cut white people hair so he said no way man.  And i said come on it will be funny if you mess it up super bad I won't care at all.  So I just had him cut the back and sides and not the top and he ended up doing a super good job.  I bought some gel and spiked up my hair and stuff and now I look super good I keep staring at myself in the mirror because I'm not way ugly anymore.  My buzzed hair is all the way gone now so I'm more happy
This week they reorganized our bishopric.  Our old bishop was called bishop Mahlangabeza but he got called up to the stake presidency.  It was funny though because he has an identical twin brother and he got called to be the new bishop so we have bishop Mahlangabeza again and he looks exactly the same haha.
With food I really have a desire to eat healthy and really live the word of wisdom but I just have no idea what to cook.  I know I could cook from a recipe but the problem is there's no way to get the variety of ingredients I would need to cook a variety of foods.  I have no idea what to buy or where to start and I feel like there's no way for me to eat healthy.  I don't really know what to do so I just eat toast with jam or nutella all the time and call it good.  I have been working out every night though and I really think I could be in pretty good shape if I were to eat more healthy.  I don't really know what to do though.  They have every ingredient you could get in America here so if you want to help me out with what I could plausibly cook for 200 dollars a month then that would be amazing but I don't really even know what to ask for.
Lately I've been reading a lot of talks and I just love Elder Christopherson so much.  He's my favorite dude he's so sweet.  All his talks are so powerful and they're my absolute favorite.  If you want to read a powerful talk with some sweet doctrine please read "Why Marriage Why Family" by Elder Christopherson


attached is a picture of our crew.  This is my zone.  A bunch of us found this cardigan at Mr Price and so we all bought it.  Everyone who has one is basically my biggest homie on mission.  It's like the sickest thing in the world so I love it very dearly.  The old people in the picture are the senior couple who stay in East London which is Elder and Sister Halverson and they're also way awesome. 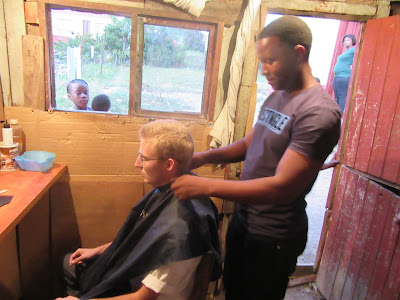 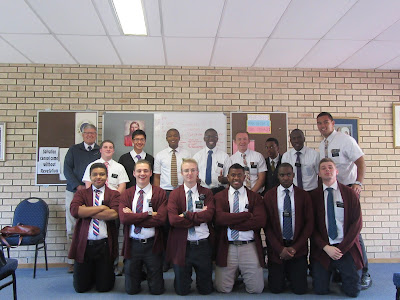 Letter to Dad:
I will be with my comp for another 6 weeks.  Transfers are on Wednesday so we will be together for 1 more transfer and then he'll leave. P days are pretty boring for the most part.  I don't think there's anything really interesting to do around my area.  We went to the beach and to this dam but it wasn't really anything special.  I haven't seen any interesting animals either except I saw a monkey just chilling in the road one time which was sweet.
Posted by radmom at 1:34 PM