From the mission president:

Elder Adam Robert Heald has been called to serve as a district leader in the Mdantsane First Ward District of the South Africa Cape Town Mission.

This calling will offer Elder Heald an opportunity for leadership and growth as he will have responsibility for the day-to-day operation within his district, in addition to his proselytizing responsibilities.

The Lord has chosen him because of his outstanding performance and commitment.  You should feel good about his progress as a missionary.  We are grateful for the training and guidance you have provided him.

May the Lord bless you for your love and support.

This week we got a new Elder in the boarding.  Elder Myeza.  He's a cool guy.  He speaks at like a million miles an hour which is really funny.  I've really loved our district.  I think at the end of my mission Elder Faingata'a might be my favorite missionary that I met on mission.  He's a really nice guy.  I realize that I haven't really sent pictures or described my district so you might not know who that is, but he came in to the boarding my second transfer and he's been here ever since.

This week me and Elder Reedy absolutely dominated as far as stats go.  Just so you can get a glimpse of what I mean, we taught 30 lessons to investigators with a member present.  We taught 45 lessons total.  We had 22 new investigators.  And we had 2 baptisms on Saturday so it was a very nice week.  We have been meeting some really powerful people.  Our next baptism is scheduled for February 25th and we have 13 people preparing for that date right now.  When it comes I am hoping that at least 7 of those people will actually make that date.

The baptism on Saturday was really nice.  X has been my favorite person that I have taught so far on mission.  His faith is so strong.  The day after his baptism, Sunday he came with us all day and fellowshipped and he was helping us teach as well.  Every time we teach him the spirit is there.

This transfer was crazy.  The whole time on mission my zone has been pretty much the same.  Elder Kraftner and Ondracek and Elder Larson have been with me the entirety of my mission since the mtc, and they all left.  It's just me now in MD zone from my transfer with 6 or 7 new elders.  Even Elder Muller who has been my zone leader since the start, went home so we have a new zl too.

Another interesting thing that happened this week.  There's a lady called N who I told you about.  My first transfer we gave her a blessing and healed her leg.  Well she was gone for December so we haven't really seen her in about a month or two.  Anyway just this week we went out to visit her again.  She was so happy to see us.  She told us that her son had come in December and brought her a new tv, 3 couches and a fridge.  She said as soon as that happened she thought of us and she said she thought that she was blessed because we had come.  We asked her where she was at in the book of mormon and she told us she was at Alma 44.  Crazy.  The spirit was so powerful in that house.  Anyway we talked to her about baptism and she said she has her church but the spirit has told her that she needs to leave and join our church and she's preparing to be baptized on February 25.  Right when we were about to go I asked her out of curiosity how long her leg had been hurting before we gave her a blessing.  She said that she hadn't been able to move properly for 6 months before we came, and as soon as we gave her the blessing her leg was completely healed.  No pain or anything.  The priesthood is real.
Anyway love you very much

Here is some pictures from the baptism


The 2 kids got baptized and the 2 adults baptized.  The one with glasses is the bishop and he baptized X, and the other one is the little kids dad. 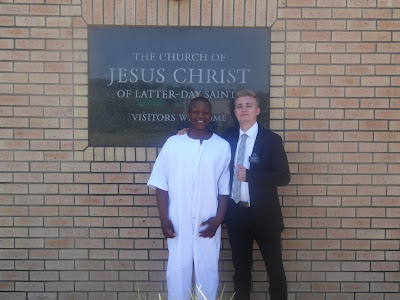 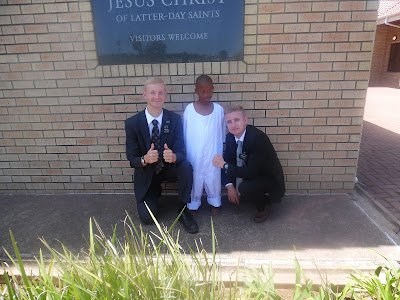 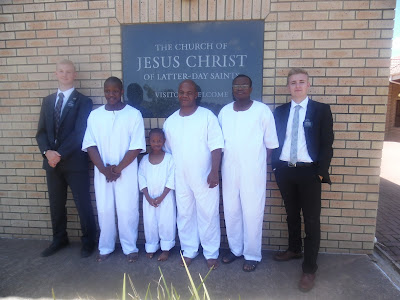