Catching up (Sorry for the length of this post)

Yeah I miss Christmas.  Christmas here kind of sucks.  There is nobody to teach for the whole month of December and so now that it's January we're basically picking up the pieces and starting over.  I'm really excited for everything to go back to normal again.

Tomorrow there is going to be a zone training, so the President will come out to Eastern Cape and we'll have a big training.  The zone leaders always train first at zone training and so this time they have asked me to do part of the training.  They asked me to train on "The Bible and the Book of Mormon"  Which is kind of funny because like 2 weeks ago we had a massive zone conference where we were trained for like 5 hours on that exact topic.  It's ok though I have found some material that we didn't discuss there so it should be good hopefully.  I'm really excited for my interview with president Merrill.  It's been a while since I really sat down with him and talked and stuff so I am looking forward to it.

This past week was pretty frustrating for me.  We normally get around 120 to 130 at church but on Sunday it was only 82.  That's the lowest it's ever been while I've been here.  We had so many people that just promised that they'd be there but they weren't.  It was New Years day, but some of the excuses I heard were pretty upsetting.  Sparks who we had such a powerful lesson with and who promised to read the book of mormon and come to church, didn't show up.  In fact he wasn't there for our next appointment either.  Our fellowshipper A said he was at home during church but he "wasn't prepared" so he didn't come.  I was pretty disappointed about that.

If you remember our recent convert family the N.  They were super powerful in November, but they didn't come to church even once in December.  I was pretty disappointed in them.  On Sunday I asked why they weren't at church and apparently they decided to go to the beach instead and take some of our other recent converts.

I'm expecting better commitment out of people now that it's January and not festive season anymore.
We have about 20 people who we taught who we need to recontact in January because they said they'd be away for the holidays.  Hopefully a lot of baptisms will come soon.
The one ray of sunlight in all of this is X.  I don't know if I've told you about him but he's super powerful.  He's A's neighbor and he has come to church 4 weeks in a row now.  He came to church on Christmas and New Years which was really cool.  He's 17 and he's super ripped which means he's super cool. :)  But every lesson we've had with him the spirit has just been so strong, and he's committed to live all of the commandments which we have asked him to live.  Very cool guy.  He's going to be baptized on the 21st and then he can fellowship with us which is nice.

I have been missing you guys especially in these last few weeks when missionary work hasn't been doing so well.  I keep thinking about how much I love winter and how much I miss the family.  The good news is that I'm coming home next year so it's right around the corner.

To Dad (This one of for all the soccer folks reading this blog):

So I have to tell you about the new elder that came into the mission.  His name is Elder Dove, from England and he is in my transfer, but he served part of his mission in England so he didn't go to the mtc with me.  This guy is freaking huge.  His arms are the size of my legs.  Anyway Elder Dove is amazing at soccer.  He played for Liverpools academy and Arsenals academy, and then he got hurt so he spent the last 2 years before mission coaching for Charletons academy.  He told me some pretty cool things.  First of all as part of the youth squad as a player you eat at the club cafeteria and you eat with all the other players at the club including the first team, so Elder Dove met all of the guys at Arsenal a few years ago.  Fabregas, Van Persie, Wenger etc..  He also met a lot of people that played at other clubs because he played against them.  He said he played against Raheem Sterling when he was at Arsenal, and he also said that he played against Jose Mourinho when he was still managing Chelsea youth.  So all of that is very cool.  So I asked him what the difference is between pros and everyone else and stuff and he said it's just a slight difference.  First of all fitness.  You have to be able to go for a whole 90 minutes without losing focus on your touch because of fatigue.  The thing he said about ball skill and stuff is that it's only a slight difference.  He said the pros aren't that much better than other players but he said they are in control of the ball rather than the ball being in control of them.  He said a lot of guys kind of know what they need to do with the ball and how to kind of control it so that they can beat a guy, but he said "David Silva knows that ball"  Basically when he gets the ball he already knows exactly where it's going to go.  Not only what he wants to do with it, but exactly where he wants it to go.  So then I asked him, what about the physical difference between a big guy in the prem and an average big guy.  He said that difference is uncomparable.  That the guys who are really just beasts physically are so much on another level that you really can't compare.  The other thing that he said is that the main difference is just that the pros want the ball 100% of the time.  He said they are always hungry to get the ball and that they work hard the entire game to get it.  He said if you can track a guy but you don't you're going to get ripped.  but yeah it was a very interesting conversation.  He also said that at the academy he trains the boys to not pass and dribble only until they hit 11 a side.  He said he wants to develop players until 11 a side and then teach them the complexities of playing in a team.  Very cool

On a different note, one thing I have done on mission that I have really benefited from, is studying Elder Christofferson.  All of his talks are about the plan of salvation.  Agency, the fall, the atonement.  My perspective on Justice and Mercy and the plan of salvation has changed just a little bit from studying his talks.  I think you would really enjoy doing the same as me.  His talks are very intellectual and so they speak to me on a very deep level.  So I think you would really enjoy studying all of his talks. 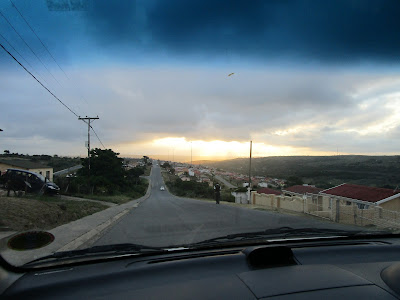 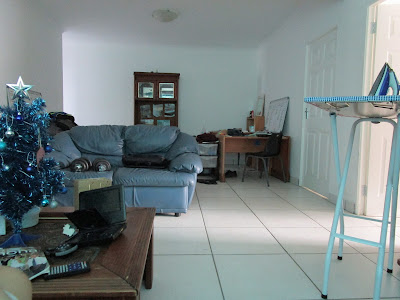 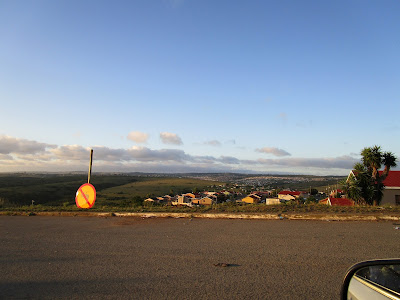 So this week was a lot better than any week in December.  Everybody started getting back from the holiday and so we were able to teach a lot of lessons this week.  Everything is starting to look up now.  I think in February we'll be able to have 10 baptisms which will be cool.  We had 3 investigators come to church for the first time on Sunday which was nice.

This week I had smiley for the first time which is pretty freaking disgusting just so you know.  All it is, is half of a sheeps head that's just boiled.  You'll see in the pictures what it looks like, but it's so slimy and it is not pleasant I promise.  It's called smiley but it should be called slimy.  The tongue was pretty good but the rest of the meat was super gross.  The ear was especially gross and the eyeball was like one of the nastiest things I've eaten ever.

I went on an exchange in the other elders area with Elder Faingata'a on Friday which was a super cool exchange.  One of the lessons we taught was this little 9 year old girl who is getting baptized on Saturday.  I didn't say anything the entire lesson because they were just preparing her for baptism and it was a super short lesson, but at the end of the lesson Elder Faingata'a said, who do you want to baptize you?  And she thought about it and she said "Him!" and she pointed at me.  And then her mom was like "Do you know him?" and she was like no and she was like "How come you want him to baptize you?"  And she was like "Because I want to know him" hahahaha.  They even asked her the next day who she wants to baptize her and she still said me.  So I guess I will be baptizing this girl that I really don't know at all on Saturday.  It will be really nice though. 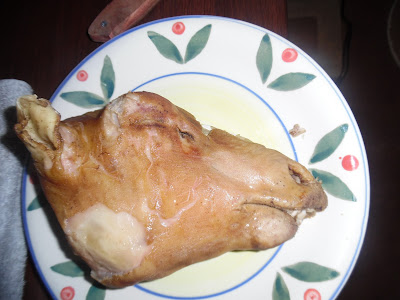 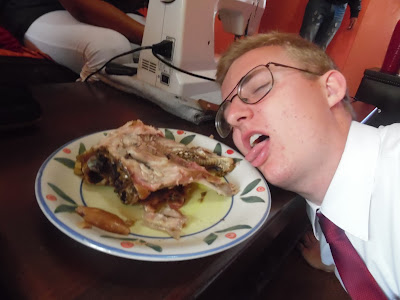 There is a video Colin posted to the blog on Monday, so if you want to see more of Smiley, see that.
Posted by radmom at 11:24 AM