I'll try and send more pictures but honestly I haven't taken any pictures on my camera.  I don't even think it works.  Elder Greengrass takes pictures of everything so I just use his pictures

As far as interactions with the president go, he called me last week.  He said "You have been highly recommended by your zone and district leaders, and the lord has decided to call you to train"  And anyway we talked a little bit and I do feel like he knows me and loves me and stuff which is really good.  He didn't come to Mdantsane last transfer though, so I haven't seen him in person for a while.

I live about 15 minutes from the beach so whenever we go into town we are right by the beach.  A lot of shops are on the shore so we walk along the road or drive down the road super close to the beach all the time.  East London isn't too beautiful.  Cape Town is a lot prettier, but I think there are a few areas on mission which are supposed to be breath taking.  Maybe I'll serve there.

It's sweet that you're going to the temple a lot.  The temple is one of the things that I really miss about mission and a lot of the talks I've been reading talk all about how important it is.

My new companion is going to be Elder Ready from Utah.  I don't know anything about him because he is fresh out of the mtc.  I'm planning on taking him for his first lesson to a member family in the ward that are super cool and we're going to pretend they're investigators and some crazy stuff is going to happen haha it should be super funny.

Missionary work kind of sucks right now.  Xhosa culture is really weird.  For December everyone goes on holiday, which is definitely different than we think of holiday.  It is not go on vacation to another place for a week and stay in a hotel.  What it means is you just move in with a different one of your relatives for a month or two months.  Everyone lives with their aunt or their cousin anyway so you just pick a different aunt in december and move in with them.  It's really weird but it's also frustrating because it means all of our investigators are gone and we have nobody to teach.  We have a really big baptism scheduled for the 7 of January with 10 people who are working toward that date, but I wouldn't be surprised if none of them make that at all.  We have a lot of cool activities planned in December though that aren't normal proselyting in the area.  We're going Christmas caroling as a zone and stuff and we have some zone fhe's too which should be super fun.

Last week me and elder Greengrass had a really cool opportunity to go to the hospital and visit a member who is terminally ill.  His name is Mncedi.  We just talked with him for about half an hour and got to know him and then we gave him a blessing.  We didn't bless him to be totally healed just that he would have strength to live his life normally.  It was really cool.  A few days after that he got released by the hospital to go and live out the rest of his life with his family so we have been visiting him at his house and teaching him the lessons.  He's really awesome.  He had been less active for years before his sickness, but after he got diagnosed he realized what was important to him.  He said his testimony is a 10 out of 10 right now and that he feels super happy now to be closer to God.  We gave him a book of Mormon and he's been reading it like crazy.  I think it's really interesting the trials that the lord gives to people.  For him the trial of being sick definitely gave him the desire and the faith to rebuild his relationship with God and I think he really feels ready to pass to the other side of the veil.

These are pictures of some really sweet kids I really love.  The girl in the pink is called Onika.  She's so smart.  She taught herself fluent English so that's pretty awesome. 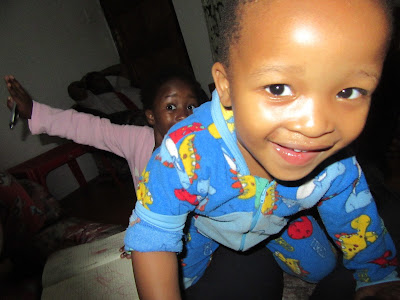 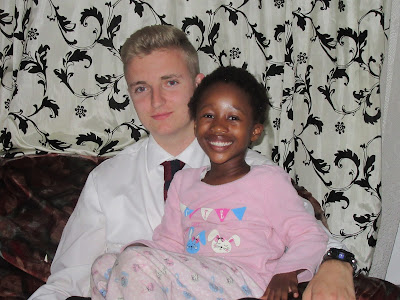 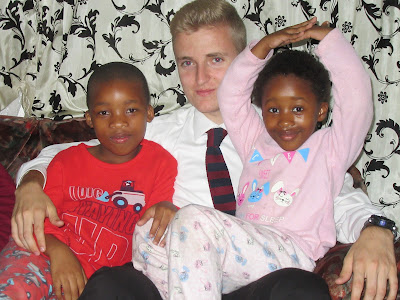 The other picture is the Ngcangcas.  They are really cool.  Every time we have ever visited them they have given us something to eat and some cold drink.  They are really awesome.  Their son Soso was baptized when I first got to the area and we were teaching them as well.  They weren't that interested though, until they came to Sosos baptism and then the light just went on in their eyes and they started to be so fired up about the gospel.  They love church so much now and they will definitely start to hold some nice callings.  Definitely they are one of my favorite families that we teach 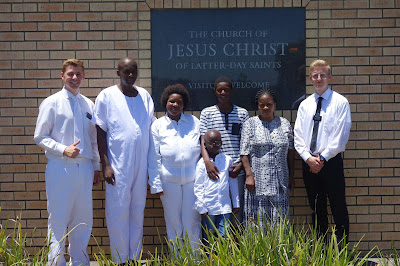