I will send you a picture of me and Mdantsane.  It is literally one of the prettiest places I have ever been.  There are million dollar views everywhere I go.  It's so awesome.  People live in a little shack they got for free and they have this million dollar view on their back porch.  It's a lot more impressive in real life though.

So basically I live in first world conditions.  Our apartment is in East London which is definitely a first world city.  But we travel to the area every day which is 3rd world conditions.  We have a car.  We drive everywhere.  I legitimately believe I could have the least sturdy pair of shoes on the planet and they would still last my whole mission.  We do very little walking.  I have never felt so fat in my life.  People feed us all the time and we never exercise.  I try to jump rope in the morning but my companion hates running and we only went once.  It wasn't a work out for me anyway because he could only go like half a mile it was kind of funny.  So I'm going to have to figure out something that works because I hate that very much.

But at the same time me and my companion are very productive.  We teach a lot of lessons sometimes 10 a day.  There are a lot of people who are very prepared for the gospel here.  One of my favorite people is a guy called Abulele.  He has been taking the lessons for a while and he reads his scriptures all the time but he just struggled to get to church.  So the first time me and my companion taught him we were going to teach him one of the lessons but we changed our plan when we started teaching him.  We were going to teach him the Gospel of Jesus Christ but then instead we decided to teach about faith and how he needs to sacrifice for God.  We told him that he can be a strong leader in the church but that Satan also knows that and he will do everything he can to stop Abulele from coming to church.  Basically we told him how important it was for him to come to church and there was a fire lit in his eyes and he committed to come to church.  And he did come to church so it was awesome.  We're planning on baptizing him October 15th.

Some other interesting stuff:

First of all driving on the left side of the road is very difficult.  Also it's kind of funny how people drive here.  If someone is going slow you just pass them.  It's usually a 2 lane road but nobody cares they just pass in the middle of the road it's funny.  Also there's about a million speed bumps its so annoying.  Literally there is one every couple seconds.

Also there's workers at every gas station that fill up your tank.  It's really weird but you never get out of the car.

There's people here called Sangomas.  They literally are like evil people that have power from Satan.  They can do magic and cast evil spirits into people.  At first I didn't believe it but I talked to so many missionaries that had first hand experience that they are real and so I have no choice anymore.  But they are way scary. 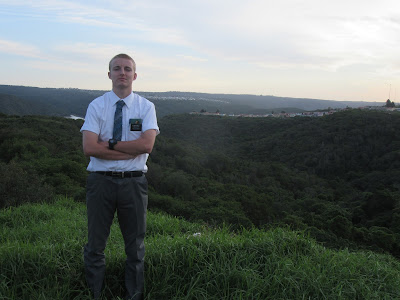