May 7 letter to Mom

The past 2 weeks have been amazing, mostly with Elder Palmer's mission tour, but also the work here is really picking up.

In the township, there are no dogs.  Instead there is a closely related species of animal called Township-dogs.  They are completely wild and hostile.  They are definitely not mans best friend.  They hate man.  They usually live in peoples yard and attack anyone that comes in.  Even their owners live in constant suspicion of them.  As a result everyone in the township lives in constant fear of being bit by one of the township-dogs.  A lot of township-dogs even roam free and wander the streets looking for old ladies to harass.  The township-dogs are very cowardly though so if you square up to them they run away.  Occasionally in the township you'll also find a nice house and inside the gate will be a pitbull or a rotweiller.  Those dogs will definitely kill you if you go in the gate.
Why do I tell you this?  Well last of last week I was checking a less active guy at his flat at the back of someones house, and I saw a dog as I walked to the back, and in my mind I saw a vivid picture of that dog biting me, so I was just waiting for it to bite, but it didn't move as we walked past so I thought it was fine.  But then as we were knocking on the door the dog silently snuck up on me and without making a noise at all it jumped out of nowhere and bit my ankle hahaha.  I was so surprised.  It hurt but not that bad and it didn't rip my pants hahaha.  Luckily it didn't bite very hard so it only barely broke the skin and it healed up just fine.  But it was cool to have the novelty of being bit by a dog :)

Then Last week I was on exchange with Elder Reynolds from Mthatha (the same Elder Reynolds who was my companion in King Williams Town) and we decided to go tracting in the colored area.  It was nice for a second while we tracted with no success, because the coloreds are a lot less receptive then the Xhosas.  Then we came to a nice house in the nice part of the colored township, and the door was open and the gate was unlocked so we walked in to go knock the door and then all of the sudden I just hear barking and I see a big black shape running out of nowhere, and I look behind me and Elder Reynolds just yells Nooooo! and I see his back arch and I thought he was a battle casualty and so I ran in the house and shut the gate door.  Then Elder Reynolds hobbled in after me and we shut the door on the dogs.  Apparently there were 3 Rotweillers and 1 of them bit Elder Reynolds in the leg just behind the knee.  Some dude came running out of the house in his underwear because he just heard our shouting and he called off the dogs.  It was pretty nuts.  Then we shared the Book of Mormon with that guy and he told us he's a catholic so it's against his religion to talk to us which was kind of weird, and then he took the Book of Mormon, gave us some antisceptic cream and we left.  We drove straight to the boarding where Elder Reynolds changed into some shorts, by the way his pants were ripped by the dog, and we looked at the damage.  The dog really got a piece of him.  He was just bleeding profusely and his leg was just so gross.  So we took him to the doctor who bandaged him, put 1 stitch in his leg, and cleaned it up nice.  We were kind of worried about it because Elder Reynolds needed some shots but he was driving all the way back to Mthatha the next day which is 3 hours away.  But we were able to take him to the doctor the next day before we left and they cleaned him up again and told him to get the shots in Mthatha so it all ended up being fine, although Elder Reynolds is still probably limping in Mthatha and I doubt his leg will heal quickly.  Cool story though.

Also the mission nurse told us to stay in the boarding so we decided to get pizza delivered and they said to expect it after 30 minutes.  I called them like an hour later asking about it and they just kept putting me on hold.  2 and a half hours later I got a call from some dude from the pizza place with the pizza hahaha.  2 and a half hour delivery that's great!
It was nice to be with Elder Reynolds again for a couple of days though.

Elder Palmer's mission tour was really great.  I was really amazed with how much love he was able to show in just a few hours.  He just kept hugging all of us and stuff it was kind of funny.  And he looked into our eyes!  It was crazy.  He would be teaching and instead of looking around he'd just look straight into my eyes for like 30 straight seconds and then he'd switch to someone else.  It was really amazing.  At the end before he left he hugged me for like, a long time, and then he looked into my eyes for another long time, and then he said that I must tell you that he said that he couldn't be more proud of me and that you should know what a great missionary I am.  He made me promise to tell you.  It really made me feel special.  He even sat by me at lunch instead of sitting with his wife, President and Sister Lebethoa, and the senior couples.
His training was pretty powerful as well, although I was more inspired by who he was, then by what he said.  But some things that really stood out to me was his testimony of the Book of Mormon.  He told us that if we're scared of using the Book of Mormon or if we refer back to the Bible with our investigators, we basically don't have a testimony because we need to trust the Book of Mormon completely.

At the MLC on Monday he shared a really sweet experience.  He said when he got called to be a general authority he was in a meeting with all the other newly called general authority and Elder Renlund came over to him and asked him how he was doing.  He told Elder Renlund "Quite frankly I feel really inadequate"  Then Elder Renlund said "6 months ago I was called to be the newest member of the quorum of the 12.  I felt like an imposter in that quorum."  He then said he had been talking about feeling inadequate as a member of the 12 with Elder Cook, and he got a really clear impression from the spirit that said "Remember where this call came from"  Then he told Elder Palmer, "You have no right to express feelings of inadequacy except to your wife."  Myself personally I'm not struggling with feelings of inadequacy but I thought it was quite a touching story.

Another cool thing that happened is that we got a referral from the President for a sister in our area.  The referring members number was there so we called him.  His name was brother Moshani so I figured he'd probably be a member in Cape Town in the President's ward.  Well I called him and I said hi this is Elder Heald and he said "Elder Heald!!" he was way excited so I was like what the heck this guy knows me, so I started thinking where I might know him from and I realized there was a Brother Moshani who was my MTC teacher.  So I asked him if he was from the MTC and he said yeah and I said you remember me?  And he said "Yeah you lit up the place"  hahaha.  But he gave us a nice referral for his sister that we are now teaching.

A crazy thing was that an elder came in named Elder Day.  When he got into East London Air Port I gave him a hug and then I said where are you from and he said Fruit Heights and I was like what the and then I looked at him and realized that I recognized him.  He went to Davis High.  I asked him if he recognized Adam Heald and he said kind of.  He's only 1 year younger than me.  I was really quite surprised that he wouldn't recognize my name if he went to Davis, but maybe he just didn't expect to meet me on mission in South Africa.  But he did know who I was a bit.  Cool though that there's another guy in our mission from Davis.

Here are some pictures.  This is last zone conference with the president (I'll send the one with Elder Palmer when I get it)
this is me and my 2 sons Elder Mabanga and Elder Khoza :)
And me and Elder Allred bringing the Elders to Queenstown for transfer day with suit cases on top of them haha. 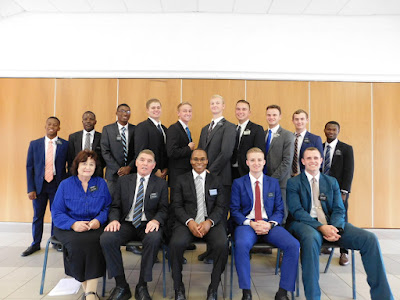 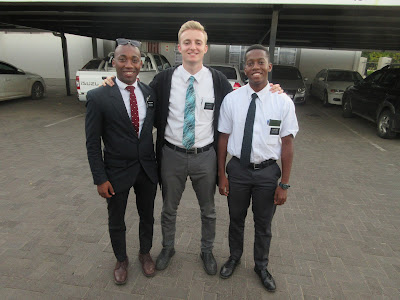 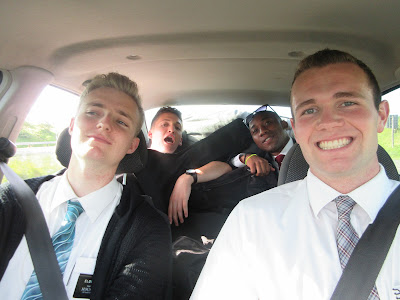