Something I have been more and more grateful for since I've been on mission is that I have goodly parents and specifically that you are a man "of a sound understanding" as they say.  I'm sure I'll be able to learn a lot of really deep things from you when I get home.  Something in the last 2 weeks that I realized I know much less about than I would like, is the plan of salvation.  From reading the Book of Mormon I have come to realize that it is a bit more complex than just spirit world 3 kingdoms.  I have studied about it a lot from 2 Nephi 2, 2 Nephi 9, Alma 11, Alma 12, Alma 40,41,42.  When I get home I'm sure we'll talk about that.

We've planned a family history fireside for my last Sunday here and we have this big vision to get people in the ward all motivated to do family history.  There's a lot of low hanging fruit here because nobody has done any family history at all.  The problem is, though, that there is no record of any of the people here, so no family history work will be able to get done past maybe grandparents.  The saying is that when an old man dies in Africa it's like a library has burned down.

This week was a really good week.  When we went on splits on Wednesday we absolutely dominated.  It was such a good idea.  We found a few new investigators, and so this week we've really started to get some new people who I think could progress to baptism.  This week we had more lessons than any other week I've had on mission.  I think we taught 53 lessons in total which is really good.

So I had probably one of the coolest experiences that I've had on mission so far on Friday:
So on Thursday we went to this really big house that we got referred too.  There was a girl who answered the door who was probably in her early 20s.  We started talking to her about the gospel and we set up an appointment.  Then this old guy came to the door and said whats going on.  Then he saw us and he said basically "you guys from America go home and teach the people in your own country.  I don't know why you think that we need you here but we don't.  We have our own churches and we don't need yours.  Never come here again.  It's really messed up that you'd come here.  There will be none of that in my house."  It was kind of stupid but we left and basically decided to never come back.  I wonder where he thinks all of the Christian churches that he goes to came from, because they certainly didn't start in Africa haha but oh well.

Anyway Friday morning we woke up and had District prayer.  Then I was laying on the couch for a second and I fell into like a half sleep and I had a dream.  I can't remember the dream really but I remember that there was a person telling me that I had to go back and recontact that house.  In my head I kept thinking, that's stupid there's no way I'm going back there.  But I kept getting told that I needed to go back there.  And anyway I was having this wrestle in my head and I absolutely could not wake up for more than an hour.  Finally I agreed that I would go back to that house and try again.  Then I woke up.  Later that day we went back to the house.  The girl was there again and the dad was gone.  She said that we shouldn't teach her because her dad wouldn't like it, but she took the restoration pamphlet with our number and she told us that she would read it.  I don't know if anything will happen because of that, but it was a really cool and clear experience of me being directed by the spirit.

On Sunday we had Stake Conference which was really nice.  There were a lot of people there.  Our stake has 13 wards and 1 branch and 4000 people so it was pretty packed.  All of the speakers talked for a really long time so when it was time for the stake president to talk he only had 4 minutes hahaha.  He gave a nice short talk though.  President and Sister Merrill were also invited to bear testimony.  Sister Merrill gave a really powerful short testimony and then President Merrill got up and spoke for about 5 minutes.  Basically he called the stake to repentance.  He said we need more missionaries from our stake to be serving.  There are 40 missionaries that serve in the East London stake, and 25 missionaries serving from the East London stake.  Basically he said we need to have 40 missionaries out from East London stake.  It was really powerful.  Some people in our ward told us that that was the deciding factor and that they now know they need to repent and go on mission.

This week President Merrill, and Elder Ellis from the seventy are coming for a zone conference so I'm really excited.

This is a cute picture of me and my friend Achuma who I love very dearly :) 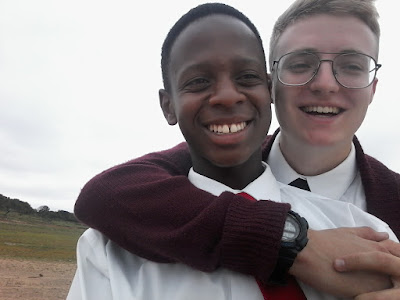