I guess I'll have to give you some details about the week.
Firstly the baptism.

The service was another really perfect baptismal service.  The whole ward came to support again.  Anika and Nwabisa were so happy to get baptized and they both bore great testimonies about how great they felt after their baptism.  There was also a young 8 year old girl that joined in the baptism.  Nobody prepared baptismal clothes for her but luckily we thought ahead and prepared baptismal clothes for them anyway so that was lucky.

We also had the confirmation of the Goeieman family.  They didn't come to church last week to be confirmed because they had a child sick in hospital but they came this time and we confirmed them and it was also really great.  I am planning to focus on families in my next area. '

Speaking of my next area.  I am getting transferred on Wednesday.  I'm going to King Williams Town which is close to Mdantsane where I started.  I'm really excited because I have no leadership other than district leader of a 2 man district which pretty much means no leadership at all hahaha.  I am going to focus on baptizing so many people.  My new companion is going to be Elder Reynolds from England.  I'm pretty stoked because I have met him a little bit on mission and I like him a lot.  Funny thing is that he's actually my first companion that has had more than 1 companion before me hahaha.  My Zone Leader is going to be Elder Greengrass again so that's nice.  Sadly Elder Dove is leaving me to go and be companions with Elder Ivins, so I'm going to be a little nervous to be in a new place without him for the first time.

This week we wanted to find some people to baptize next transfer and we had a lot of success.  We had one really cool experience.  There is a family called the M family.  Father mother and 3 daughters.  Apparently the wife was going from church to church looking for something right.  The husband didn't really like church because he just didn't think it satisfied his needs so he didn't go, but the wife had been praying that the husband would lead the whole family to a church where they could worship together and be closer as a family.  The husband didn't know that but apparently he was just standing by the church one day and he realized that in 30 years of living here he had never seen that church, and for some reason he had the strong prompting that this is where God wanted him to be, so he went in on Sunday at about 1:00 after church ended and he talked to the bishop.  We went out to see them on Saturday and taught them the Restoration.  We had such a powerful lesson.  The spirit was definitely there, they were close to tears.  They promised us to be at church on Sunday although they didn't actually come.  I'm sure though, that they'll be baptized in the 2 months or so.

I think you want to know about the zone conference with Elder Koch.  Apparently Elder Ballstaedt's great uncle Immanuel Ballstaedt baptized Elder Koch's parents which is crazy.  So Elder Koch started out the meeting by announcing to everyone that he had served a mission with my brother and saying "Elder Heald's brother was the greatest baptizer in the history of the Mozambique mission."  then he went on to talk about Elder Ballstaedt and how awesome his great uncle was.  Me and Elder Ballsteadt were laughing for the rest of the day that we have royal blood in us and at least we are related to greatness.

Elder Koch's training was really something special though. He said so many things that were just so profound.  I am actually going to completely change the way I do missionary work after hearing his training.  Me and Elder Faingata'a and my companion have just been talking about the training the whole time since he trained us on Thursday.  Just before lunch he announced that he would only be interviewing 2 missionaries.  Me and Elder Ballstaedt looked at each other and just laughed we said it would be us 2.  But no he didn't interview either of us.  Apart from the doctrine though which was just so amazing he also bore a powerful testimony.  I really knew that the gospel is true while he was speaking.  The AP's texted us that under no circumstances should we ask Elder Koch to take a picture with us.  as soon as we got that text I told Elder Khoza that Elder Koch was going to ask me to take a picture with him anyway.  I was right haha.  But the zone conference was a really great experience for me and Daniel was really lucky to have such a great mission president
I have been getting all sorts of comments ever since then though about my brother and his baptizing prowess hahaha.

Unfortunately I'm with Elder Faingata'a and Elder Dove right now.  We had to take Elder Huang to the airport so me and my comp split up and he has all the pictures.  I'll send you the pictures of the baptism next week.

Sister Koch sent these pictures to me (Mom) 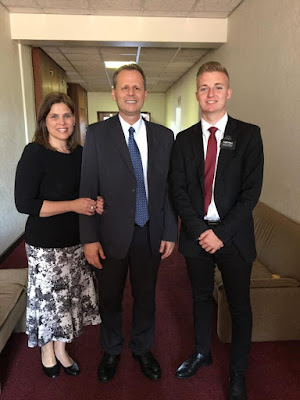 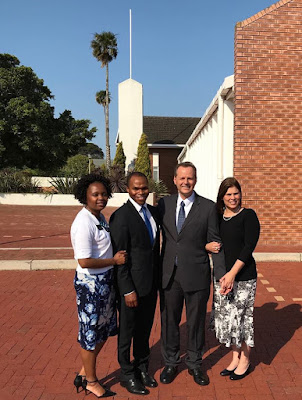